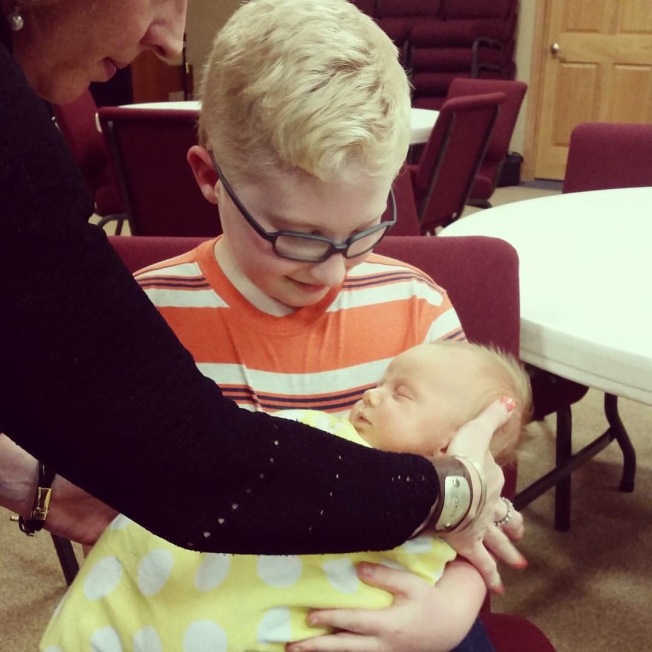 This picture posted in my Facebook memories for a year ago. What do you see? An adorable boy holding an adorable baby? The calm joy that comes in keeping a sleeping baby in a sleeping state?

I see a boy who “should” have had a sister of his own to Hold take delight in feeling the love of holding somebody else’s brother.  I see in his arms what was ripped from my arms. I see my arms stretching out to keep the world spinning and keep it still at the same time. I see victory in the midst of surrounding defeat and I see peace in the dangerous gusts of stormy winds. I see a miracle. Unexplainable control of self and circumstances. I see courage and bravery and tenacity unrivaled. I see a love bigger than myself and a life worth holding onto.

I would love to tell you that I have no idea what made me fight so hard for the ability to attend a baby shower less than a month after my own baby died.  Because it does seem crazy now. But the truth is I needed to remain true to my ideals and values – even in a season of grief and unrest.   If we stop living and loving and caring when one of us dies, then we all die.  And man is appointed to die but one time. And that time is not while he is still living.

I love my friends. I believe we should rejoice with them as they are rejoicing. I believe new life should be celebrated and that friendship is more important than selfishness.  I believe that babies fresh from heaven should be loved and admired by as many people as possible. And I believe it enough to fight for it.

To fight my own panic in the baby section of target. . . To fight the enemy that says I could never make it through the shower and would humiliate myself. . . To fight the part of me that stopped breathing when he asked if he could hold baby Henry. But not just to fight.  To win.

I died a thousand times this day and even the days leading up to it. But only so I could LIVE. Live true to the me I’ve always been. To that which I hold dear. To the work He’s being faithful to complete. It ain’t always pretty but it’s always good and it’s always worth it.  And the alternative is death- only the kind of death where you are still alive. And He didn’t die for me to live like that.